501 in an indestructible rack format. 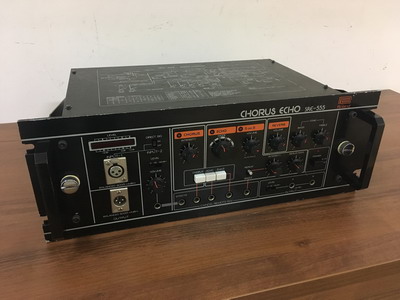 – Perform general cleaning of the inside and outside of the unit, including tedios cleaning of tolex and metal hardware
– For 100V (Japanese) versions, replace the Japanese PSU with brand new, tailor made 230V PSU
– Replace the capacitiors in the PSU
– Regenerate all pots
– Disassemble, inspect, lube and test the motor. Replace noisy bearing when necessary.
– Polish the heads, set proper levels and positioning
– Replace all felts and install newly sliced tape
– Perform calibration to factory specification

We are now switching to Echo Fix parts! analogia.pl is continuing to remain in the Space Echo super league and from now on all of our echoes will feature rollers, tapes and other pieces of hardware supplied by the best specialis in the world, the Australian Echo Fix. The prices of 201 in Japan are rising rapidly in Japan, where we source our echoes and we strive to keep them as low as possible. If you check our prices against other delaers in Europe, you will still notice we are very competitive, especially when a staggering amount of time is spent on each one here at www.analogia.pl

THIS IS ONE OF OUR BEST SELLING PRODUCTS. PLEASE EMAIL TO CHECK AVAILABILITY AS IT MAY CHANGE UNEXPECTEDLY.

3. Overall, i guess the two models reflect the decade in which they were build and this not only “technically” of course, but also in terms of they way they “sound”: the RE 301 is raw, psychedelic, unpredictable and powerful. The RE 501, on the other hand, loses something of the “wild” nature of the RE 301, but it gains in reliability, noise reduction and overall integration in a more modern studio environment (the XLR connectors say it all!).