On our history plus a word about my music

Electronic Beat’s take on what we do – 9 minutes that capture the spirit of what we do:

Contrary to an ever more popular belief, there was life before the advent of the internet. For a person like myself, born in the late 70s, right into the times that marked the slow end of the fantastic “analogue days”, that was no easy period. First of all, I come from a very non-musical family and, in my teens, very few of my friends ever had anything to do with instruments other than guitars. Then, as it appeared, there were relaitvely few proper analogue synths in Poland as in the not-so-fun communist era they were expensive to the point when only organisations, never private musicians, could afford synths.

If I could mark one single moment of a literal revelation, it would definitely be one of Future Music’s issues with a lengthy article on the history of analogue synths. It struck me as a lighting and I instantly knew it was MY world. But I was tabula rasa personified with no one in the know to turn to and ask. And it was still quite some time to pass before the first Internet cafe appeared in my city.

My first synths that I bought more or less in the same time were two Korgs: Poly 61 and Mono/Poly. Very nice selection when I look at it now but not the easiest of choices back then. Remember – still no one to ask for advice and no manuals to refer to. Still absolutely fascinated by the analogue world, I began to decipher this new language of subtractive synthesis. Why would a synth need two envelopes? How do you tell PW from PWM? If the Poly 61 is polyphonic, what is the Mono/Poly really? How to check if I have not broken anything? Those were the questions of my youth.

Over time, I gathered more experience, more synths and, luckily, access to the Internet, the ocean of knowledge that not only helped me to learn more, but also allowed for getting to know people, both home and abroad. Since there were not too many people in Poland who would be passionate enough to do some research and write an article on a given synth, I had my first article published in one of the leading magazines called “Stage and Studio” when I was 18. I use that moment to mark my semi-professional and then professional career.

Then came the years of my early coach trips to the UK. I would literally jump on a regular Poland-London shuttle coach with a few synths (sometimes weighing more than 100 kg in total) and travel 30 hours to London where I was (and always hoped) to be picked up by either a client of mine or one of my friends if the delivery was to take place later. By this new, face to face method of sale I was able to secure my position and good name in the UK, which has helped me a great deal in the future – let’s face it, back in the days people weren’t to keen to send money to countries like Poland, then not even members of the EU.

But the best was (and still is!) to come. Not too many years later, I have met very reliable suppliers in the Kyrgyz rebublic, which allowed me to buy plethora of most peculiar and obscure Soviet synths, certainly including the classic ones: The Polivoks, Aelita and Estradin. Unsurprisingly, even though we are still in close relations, the nature and complexity of Asian post-Soviet countries makes it gradually more difficult to make timely deliveries – the recent civil unrest which placed Kyrgyz Republic on the verge of a civil war did not help up one bit.

At some moment in history, I have decided it was time for me to embark on a trip to the US to pick the instruments I was after with my own hands. While the idea was generally correct, I was was quite surprised about the size of my undertaking when I set my feet on American soil. A few thousand miles were to be travelled, East Coast and Midwest to be visited, dozens of (sometimes very heavy) instruments to be picked. Truly fascinating experience but also a very strenuous one. Even though I travel far less nowadays, memories of mountains in West Virginia where I picked up a Minimoog or a studio in the suburbs of Toronto where Hammond RT-3 with Leslie 122 was bought still make me smile – no one will ever accuse me of not pushing my imagination at work to the very maximum.

All that said, if I was to name one single best aspect of running analogia.pl, it would definitely be the possibility to meet all kinds of fascinating people. Jazz musicians, pop musicians, electronic musicians, experimental musicians, serious enthusiasts, avid collectors – they all make me feel I’m doing something worthwhile. If it sounds cliche – so be it. After all, music is for people, by people and about people.

Quite often, I get asked about synths I own and use. I was lucky enough to fight the GAS (gear acquisition syndrome) many years back and I have limited my studio and live rig to the bare minimum. The only synths I own now is EMS VCS3 Mk1 with TKS sequencer, EMS Synthi AKS with a number of Robin Wood mods and EMS Vocoder 1000 – not a synth but definitely an instrument in its own right. 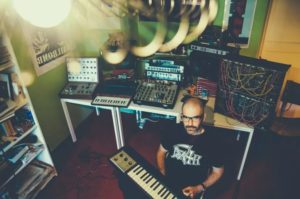 The majority of my recent music work is with Pin Park (for digital, visit: https://pinpark.bandcamp.com – we also have vinyl, please get in touch if you would like to purchase a copy) but, occasionally, I also release records under my own name. The latest is called ‘Exercises For Synthi AKS solo’ and, not surprisingly, features my solo AKS works. It can be found on Spotify:

A word on vintage synthesizers

Vintage synths here, vintage synths there. We mention them a lot, but you might as well ask “what are they really?”. Wikipedia will tell you that “an analog or analogue synthesizer (or analog synth) is a synthesizer that uses analog circuits and analog computer techniques to generate sound electronically” but it’s not much help, innit?

In very simple terms, analogue (or vintage) synths are synthesizers built in the 70s and 80s* that are not produced anymore but are still used, both in studios and on stage, by musicians of virtually all genres. Why, you might ask again? Isn’t modern technology better?

There are dozens of answers to this question but, from my experience, it’s because of two reasons: the sound and the feel.

Even though they are mere electronic devices, they tend to be fairly unstable, imperfect, sometimes quirky, often yielding unrepeatable results. They are somewhat like humans with their better and worse days. The end result is what matters most – the sound they produce is organic and, for the lack of better term, pleasant to the ear at home, pleasant to the guts when heard from stage. How about technology? Well, for the best part of the last 20 years people were striving to recreate and nail that sound, hoping to render the original machines obsolete. The advent of computer technology and super fast machines only added to that hope. I guess it’s safe to assume that while the aim was never achieved, a whole new world of fascinating instruments was born: physical virtual analogs and computer plugins. That said, we are back at phase one. There is room for everything.

But then, there comes the imponderable: the feel. The analogs are beautiful, often true works of art and design. It’s inspiring to look at them, it’s inspiring to even touch them, let alone trying to play and program. They are genuine musical instruments as, very often, they will respond differently to the same commands or behave in a totally different fashion even though treated in a slightly altered manner.

And some of my favourite synths, the ones I truly adore when they visit our workshop? Oberheim SEM based X-Voices (Two Voice with Mini sequencer is awesome), SCI Prophet 5 (one of the sexiest designs ever), Roland SH-101 (inconspicuous plastic toy that spawned techno), SCI Pro-One (another toy with budget feel and extremely kick-ass sound), Polivoks (how vicious the sound!), Roland Jupiter 4 (slow random arpeggios are to die for), ARP 2600 (semi modular mayhem for life!), Boehm modular (some serious, 3340 based, banana modular fun), Yamaha CS-80 (wish I could play well enough to make good use of it), Crumar DS-2 (an undiscovered gem) and last but not least, the huge Elka Synthex.